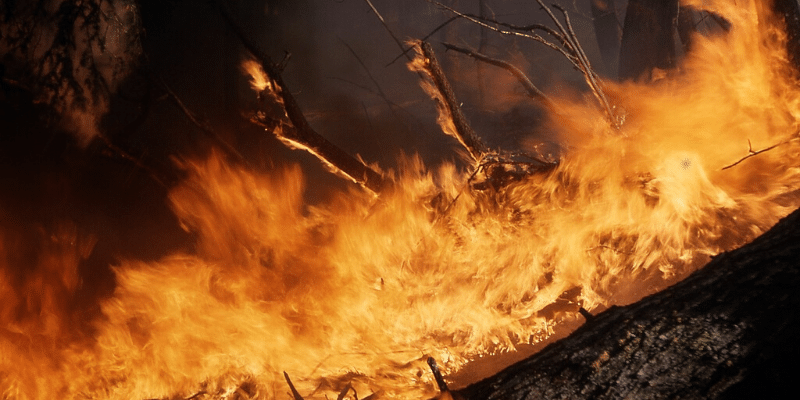 Each and every year, destructive wildfires take a blaze throughout the United States causing wreckage many times beyond repair. Natural disasters like wildfires are not the only issue that our country has been faced with as of recently, with the Coronavirus pandemic sweeping through and changing the world as we know it, especially for businesses in the U.S. Areas in the West such as California, Washington, Arizona, and Colorado are no strangers to the damaging impact of wildfires both on residential buildings as well as commercial businesses. When wildfires rage on they will produce an abundance of smoke, soot, and other particles into the air that can flood into many areas past the impacted environment where the wildfire is burning.

Wildfires will ultimately create a very toxic air space in the areas surrounding the fire, as wildfire smoke can travel for great distances and infiltrate indoor environments nearby such as home and businesses in the area. Businesses have already been significantly impacted by the Coronavirus outbreak, and when wildfire season starts to take off it can only mean more trouble for these essential businesses. Thus, what can be done during wildfire season to act as a layer of protection for these businesses affected and can an air purification device be the perfect addition to work to protect these indoor environments from wildfire smoke?

In this article we are going to learn more about how wildfire season impacts businesses, what causes wildfire season, and discuss whether or not an air purifier will work to mitigate wildfire smoke in indoor environments like businesses.

When is Wildfire Season 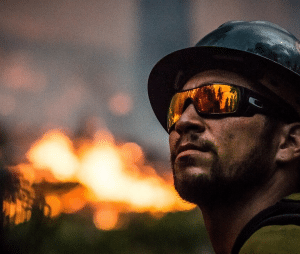 Did you know that 2018 wildfire season in California was one of the largest recorded in acres burned, as well as most destructive in property loss? The severity and overall size of wildfires have drastically increase across the US over the years which has led a change in the wildfire season. Usually wildfires season is the range between what is typically the season’s first large fire to the seasons last, which historically has taken place in the summer months

According to USDA, initially wildfire season was largely based on conditions in the environment that allow for fire to start and to burn – usually when winter snows melt early, and rain is coming later in the fall. This once four-month fire season now lasts for much longer, on average about six to eight months due to the conditions that have been present as of lately with winter ending early and fall starting later.

Why Do We Have Wildfires?

Have you ever wondered what exactly are the root causes behind wildfires and how they get started in various areas throughout the world? According to National Park Service (NPS), nearly 85 percent of wildland fires in the Country are caused by humans. Mainly human caused fires will be a result of campfires left unattended, burning debris, equipment use and malfunction, negligently discarded cigarettes, and intentional arson incidents. Additionally, other instances can occur such as by nature and wildlife, such as lighting. There are two types of lighting – cold lightning and hot lightning; cold lightning is a return stroke with intense electrical current but of relatively short duration, whereas hot lightning has currents with less voltage but for longer periods of time.

No matter what the cause of a wildfire is it can cause complete destruction to the environment. When these fires start to burn, they will release soot, smoke, and particulate matter in the air, and it will create a volatile indoor environment. Therefore, it is important to try to minimize the creation of wildfires, especially man-made ones that can leave complete devastation to many people and areas.

A naturally occurring wildfire can start and blaze on during any time of year, but especially when the weather is dry, and droughts are present in the environment. When dry weather occurs, it can turn normally green vegetation into a bone-dry, flammable fuel that when mixed with strong wind can start and spread a fire rapidly. There are several conditions that can take place outside that will cause a wildfire to start and spread aggressively, such as fuel, air and heat sources, and this is what firefighters call the three elements in the fire triangle.

Wildfire What to Do to Protect Businesses

The repercussions of a wildfire can be drastic on several aspects, to the environment, to homes, to the air quality, and even to local businesses within the affected area of the wildfires. Business owners will often feel helpless watching a wildfire encroach on their livelihood, as they can contaminate the indoor air of your business and restrict the number of patrons that may frequent your business. Specific businesses will have to communicate to find out and integrate resources in their business to help with employee safety and the safety of patrons. This can include face masks, air quality devices, and even certain ventilation within the building’s premises.

Certain businesses like dental offices, restaurants, doctors’ offices, hospitals, and retail stores will have to take steps to ensure that when they have people in their business, they are protecting them with proper safety equipment and measures in the indoor space. Dental offices and other medical facilities, in particular, will have an important responsibility to maintain healthy environments in their indoor space, especially indoor air quality since they have potentially vulnerable people that are within these areas. These businesses will have to determine what safety measures are needed and what type of equipment will be helpful in mitigating airborne particles and smoke produced from wildfires in the area. 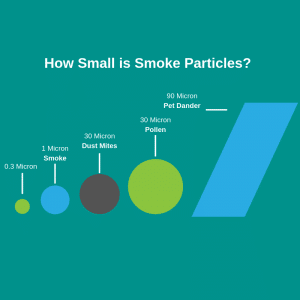 Wildfire smoke particles that are classified as tiny, unnoticeable pollutants that float in the air during and after a fire are classified as PM2.5 – which refers to any particulate matter that is less than 2.5 micrometers in diameter that are present in the air. The size of PM2.5 is nearly four times the size of small particles like dust, pollen, and even mold particles that float in the air. Due to the extremely small size of PM2.5 it presents an array of potential health issues to those individuals that are exposed to the fine particulate matter. This matter when ingested or inhaled into the human body can reach deep into the lungs and the bloodstream of the body – which can increase the risk of heart disease, lung disease, and diabetes.

You may be wondering, how small exactly is one micrometer? And this is a great question, because often we do not use or understand this type of measurement. For comparison, a strand of human hair is about 60 micrometers in diameter, so to compare that to the size of particulate matter from wildfire smoke you will more clearly understand the severity of its size when in the air space.

Wildfire smoke consists of both large, visible particles of ash, and ultra-fine particles that you cannot see. In dealing with particles in the environment caused by a wildfire you may wonder, do air purifiers help with wildfire smoke that is in your air? An air purifier is not going to address the large particles which will quickly find its way onto an easily cleaned surface. But, in reality, it’s the small particulate matter that you want to address, due to their potentially hazardous properties. The small particulate matter can be hard to capture as they are very small matter in your air. The best way to mitigate and remove these small microscopic particles is through the use of an effective HEPA filter that will remove particulate matter as small as 0.3 microns or larger. HEPA filters can be effective for people who have problems with airborne allergens and irritants such as wildfire smoke. With the EnviroKlenz Mobile Air System, you get the added protection from a hospital-grade HEPA filter to remove particulate matter, as well as a patented earth mineral VOC air cartridge that is effective at removing and eliminating components found in smoke including:

Air purification can be a critical component in protecting your indoor air from wildfire smoke and its hazardous compounds. Be prepared next wildfire season with an effective air purification system that you can use to shield your home.

When you are on the hunt for an effective air purifier to combat wildfire smoke and to act as a wildfire smoke inhalation treatment in your home, there are several different components and functions to take into consideration before you make any hasty purchases. With the broad range of air purifiers and the different technologies and filters they utilize can all play a role in how effective it will be in filtering out wildfire smoke from your indoor air.

Before you purchase the best air purifier for wildfire smoke, there are three major mechanisms to look for to ensure that the air purifier is capable and effective at eliminate the many different components of wildfire smoke from your air.

Therefore, utilizing an air purifier like the EnviroKlenz Air Purifier could be a game changer for businesses that have become effected by wildfire smoke in their area, and help to increase business in a safe, effective manner.

The OdorKlenz-Air Cartridge for HVAC systems eliminates pollutants, odors and corrosive gasses associated with indoor air quality problems without releasing chemicals, fragrances, or masking agents back into the environment. The cartridges install right into your system and treat the air as your system is running and begins to immediately improve indoor air quality the moment installed.

✓ Patented Earth Mineral Technology works to attack the VOC and break down on a compound level.

✓ Can be incorporated into an existing air handling system (HVAC) and configurations, or used in portable/mobile air filtration systems

✓ No chemicals or masking agents

✓ Will not release any chemicals back into your environment

✓ Comes in a variety of custom sizes and depths 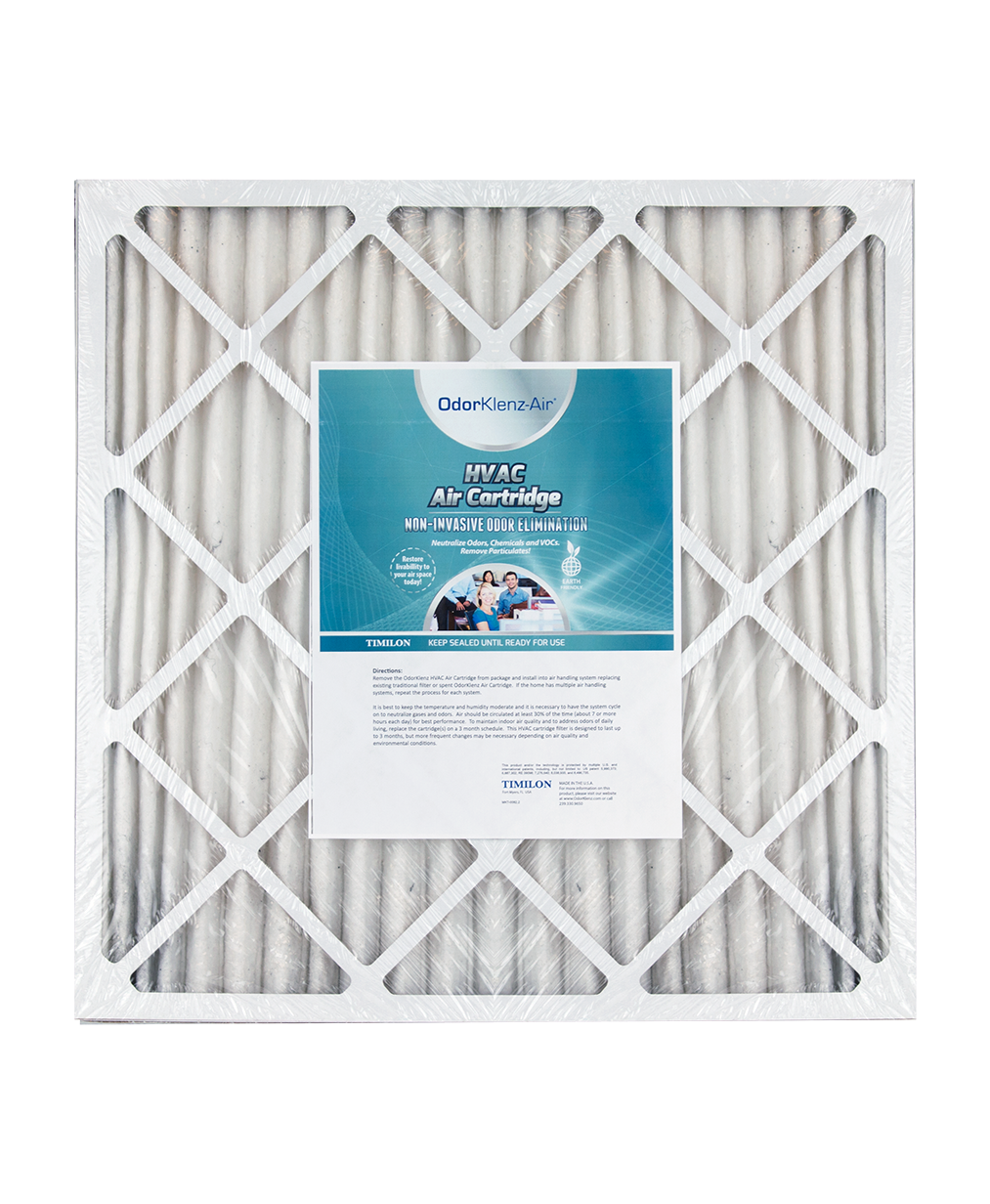 If you have any questions please fill out this form and we will get back to you as soon as possible.